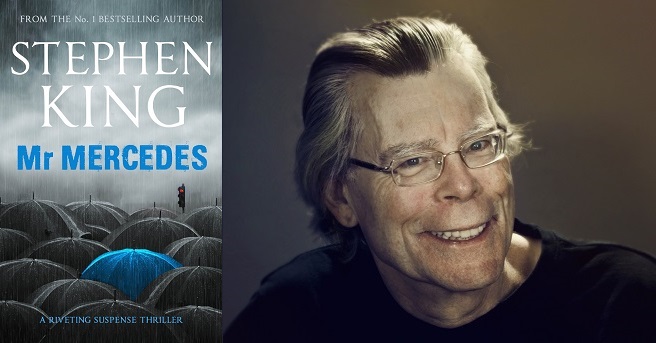 After I’d crossed IT off my list of must-read Stephen King books, I wasn’t sure which one to tackle next. Of course, my options seemed limitless. The man’s bibliography stretches as far as the river Nile, with everything from short stories to novels the width of a King James Bible. Naturally I gravitated more toward the supernatural stories like Salem’s Lot or Pet Cemetery. Though during one of my usual Barnes & Noble visits, I came across one of his more recent works, a realistically-grounded crime thriller called Mr. Mercedes. And because I was in the mood to try something familiar yet totally different, I decided right then and there to make it number two on the list.

The book centers on Bill Hodges, a detective whose life has come to a mundane standstill following his retirement from the force. He spends his days stuck on the couch, drowning in daytime television and often contemplating suicide. One day he receives a letter from someone claiming to be Mr. Mercedes, the masked madman who rammed a car into a crowd and killed eight people a year or so prior and a man Hodges failed to catch. Mr. Mercedes mocks Hodges ruthlessly, boasting about his kills and urging Hodges to turn the gun on himself. Rather than succumb to the taunting, Hodges decides to get back in the game. With some outside help, Hodges goes after the Mercedes killer, determined to put an end to his games before he strikes again.

As I was reading Mr. Mercedes, I couldn’t help but think back to when I read IT. The difference between classic Stephen King and modern Stephen King isn’t too stark a contrast, but it’s fascinating to see how his style of storytelling has evolved. The writing it still very tight. His use of active voice, the fantastic dialogue, and good build-up of suspense lends itself to a strong thriller. It also helps that characters, both main and secondary, feel like three-dimensional human beings. I like how much attention King devotes to developing both the hero and the villain. The tension and rivalry between the two make for a compelling story.

Another plus is that the novel moves at a quicker pace. Although I enjoyed IT, a major flaw that kept me from loving it was the fact that much of it was overwritten. The plot was bloated with an over-abundance of details, character histories, and portions that felt like they were written in five minutes. A few- well, more than a few- shavings were definitely needed. Mr. Mercedes seems a lot more focused. It gets to the point while still providing enough juicy information about the environment and characters to keep the reader invested.

Overall, this is an excellent book. Its only hindrance is an unsatisfactory conclusion. Not to give anything away, but there’s a confrontation that happens between two characters. It should’ve obviously been between the main hero and the antagonist, but rather it’s between the bad guy and a different, albeit benevolent, character. It doesn’t necessarily ruin anything, it was just disappointing. Besides that, though, I really enjoyed Mr. Mercedes, more so than IT. I’d say check it out, but I have a feeling that you already have.