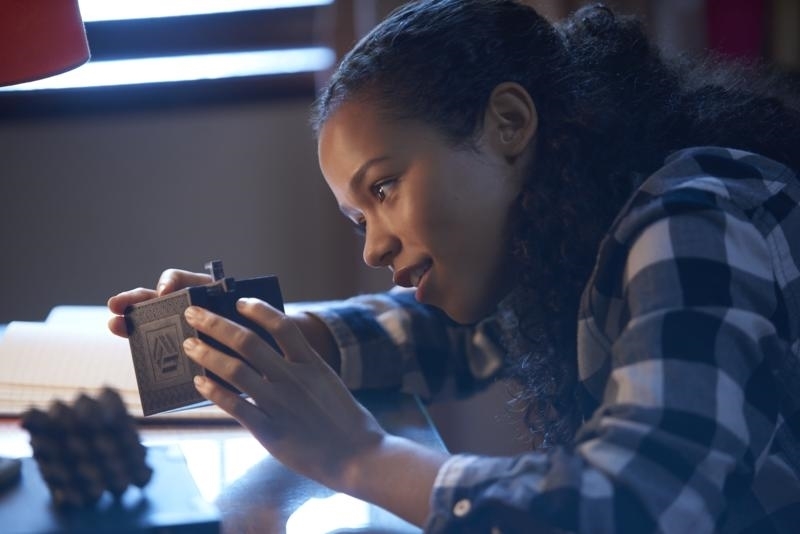 A new year has arrived! With it comes a slew of New Year’s resolutions. Some people vow and ultimately fail to get back to the gym. Others try to break bad habits. Some want to learn a new language or get married or go back to school. For me personally, I just want to see more movies. Good ones, bad ones, meh ones, bleh ones. Whatever ones. I want to get a taste of everything, and the first taste of 2019 comes in the form of Escape Room.

The film is the latest horror-thriller from director Adam Robitel, whose name you might recognize under such titles as Insidious: The Last Key and The Taking of Deborah Logan. It centers on a group of people who are invited to participate in an escape room, an elaborate game in which players have to solve a series of puzzles using hints and clues hidden within the room. For our leads, however, the game is quite different. Instead of one escape room, the group has to get through a few. The setups are beyond extreme, and any wrong move will cost them their life. So now they have to navigate the many rooms and many puzzles, and hope they come out alive on the other side.

The biggest surprise this movie has to offer is the fact that it isn’t as bad as you’d expect it to be. The month of January is notorious for being a cinematic dumping-ground, a place to shove bad movies (usually horror-based) while the studios make room for the good stuff down the road. Escape Room is a slight exception- extra emphasis on “slight”. While barely a good movie, facets of the script and technical craft have shades of cleverness and creativity.

Each escape room has a cool set design, and the film’s most interesting aspects come from how they function as intricate deathtraps. The director does a good job at building up the suspense during these sequences, and the actors’ performances convey a high sense of urgency. As a result, the entire middle portion keeps you invested, no matter how clever or ridiculous certain parts may be. With every new scenario I found myself thinking about how I would handle the puzzles (honestly, I’m 99% sure I’d be one of the first people offed, but I digress).

All of this is sandwiched between a clunky first act and a predictable third act with a finale so forced that it feels like the beginning of a completely different movie. The film shoots itself in the foot within the first 5 minutes. It opens with a sequence that no doubt takes place later down the line, then it flashes back to hours prior and we see how the film gets to that point. Doing this absolves much of the tension because it spoils (for the most part) which characters survive and which won’t. So when they’re introduced, you know instantly who is getting picked off. And it doesn’t help that the characters themselves can be obnoxiously tropey (especially the overly chatty-nerd and the timid intellectual turned hero by the end).

Things don’t go really downhill until the last 5-10 minutes. The ending tries setting up the possibility of future sequels, but does so in such a forced way that it feels like you’re actually watching the opening act of said sequel. There’s no subtly, no brief hint at a continuation. It’s a shame because up until its final moments, the film was doing a decent job at being its own thing. If it had continued on that path and avoided turning into franchise-bait, the film as a whole would’ve worked a lot better.

As is, Escape Room is a fine piece of escapist entertainment (pun intended). It’s not bad enough to be a dumpster-fire January release, but I’d be lying if I said it was objectively good. Despite its clunky start and bad finish, the middle is where the best stuff lies, and it’s worth the price of admission. It’s not a must-see, but if you find yourself bored to tears one chilly afternoon, it’s an okay way to pass the time.