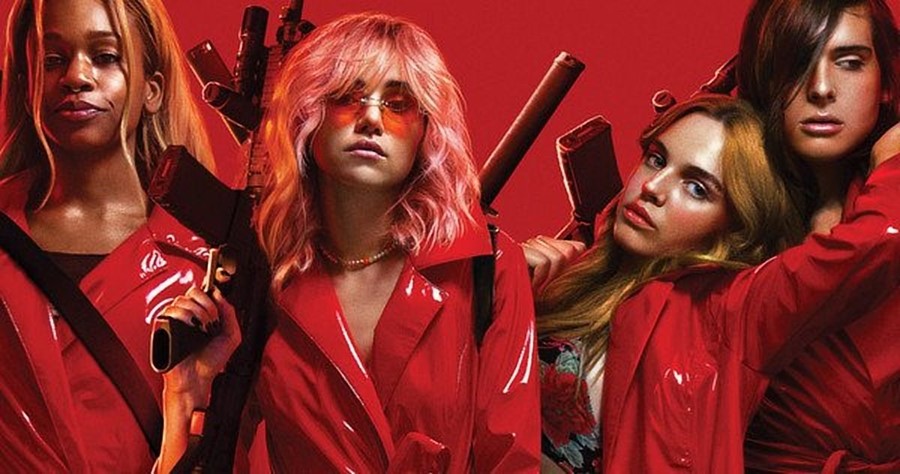 You can tell a film’s not going to pull any punches when it opens with a montage of trigger warnings. Sex. Violence. Misogyny. Racism. Fragile male egos. The words come at you in rapid succession like machine gunfire, each one glowing in beautiful neon colors. It’s a clear indication of what’s in store. The filmmakers are taking you on a wild ride, and if you don’t like what they have to say along the way, then tough luck. You just have to shut up and deal.

The tone it sets carries through the rest of this bombastic thriller that stars relative newcomers Odessa Young, Suki Waterhouse, Hari Nef, and Abra as a group of friends who live it up and party hard in their fictional town of Salem. Their drug- and sex-fueled adolescent fun comes to a screeching halt when a hacker starts tapping into everyone’s social media and exposing their deepest darkest secrets. As a result, Salem descends into absolute madness. The once All-American suburb morphs into a horror-show of scandal, rage, vengeance, and ultra-violence. And our lead quartet finds themselves in the center of it all, having become the prime targets of Salem’s furor. So not only do they have to come to terms with the hack, but they also have no choice but to take up arms and fight for their survival.

When I first saw the trailer for Assassination Nation, I was a bit skeptical. I liked the hyper-stylized look of it, the originality of the premise and its general in-your-face attitude. At the same time, however, the trailer gave off a thinly pretentious vibe. I remember thinking, “Wow, I hope I don’t choke on all the social commentary this movie is determined to shove down my throat.” So I went into this movie with low-ish expectations, though I walked out feeling relieved.

Assassination Nation is fun, smart and unapologetically brutal. Clearly drawing inspiration from the Salem witch trials of the early 1690s, the film takes the lore of mass hysteria and brings into the digital age. It explores different aspects of the current culture surrounding social media, including just how far it’s become ingrained into our lives and the emotional consequences of it. It also does a great job at highlighting hypocrisy. When the truths come out, accountability goes straight out the window. The people of Salem don’t take responsibility for their bad behavior. Instead, their anger is directed to whoever exposed that bad behavior. They place the blame on other people, and placing that blame involves hurting others while also defending themselves as “good people.” The idea can be hard one to stomach, but the film’s darkly comedic tone helps soften the blow a little.

And that’s a testament to Sam Levinson’s direction. His hyper-stylized approach works very well within the confines of this type of outrageous story. It pops visually, and the violence, while brutal, never feels gratuitous. The progression of events is done very well. I had a hunch of where the film was going, but I was still excited to see the avenues it took to get to that end point. The most impressive aspect of Levinson’s writing is his portrayal of female sexuality. A major source of conflict for the female characters- namely the main girl, Lily, played by Young and Bex, played by Nef- comes from how others perceive and, in some shape or form, negate their sexuality. Everything about their struggle feels authentic. And I think that’s really cool. Despite being written about by a man, the overall perspective still feels exclusively female.

All the actors find a nice balance between taking the material seriously and embracing the insanity of it. Performance-wise, they’re not all great. Some are stronger than others. But on the whole, nobody feels like dead weight. The four main actresses do a great job, and the secondary characters- played by Bella Thorne, Bill Skarsgard, Joel McHale and others- do a solid job as well. The characters are thinly written, and could’ve used a bit more fleshing out. I personally found it hard to relate to them since they’re the kind of party-hard teen characters I’m generally not a fan of in movies (think outspoken reckless teenagers you’d see in horror movies, but toned down a few notches). But the girls who make up the lead quartet aren’t insufferable. You do find yourself caring for them and wanting to see them get out of the situation okay.

In the end, Assassination Nation isn’t going to be everybody’s cup of tea. Though its a film that at the very least deserves a chance. Yeah, it’s violent and unsettling at times. But it’s also clever, confident, entertaining, and it has something important to say, so why not take some time out of your day to listen?