As I mentioned in my review for Won’t You Be My Neighbor?, I’m not usually one for seeing documentaries in theaters unless it’s part of a film festival. Not that I’ve never been interested. Normally the case is either a) documentaries- the really good ones at least- rarely come to where I live, and b) if they do, their subject matter doesn’t intrigue me. Three Identical Strangers is a slightly different story. I first heard about it on the radio while one my way to work. A critic on the radio was raving about it to his disc jockey friends, telling them how crazy and fascinating the story was. Funny enough, I went home later than day to find my mother making plans to see it the next night. So I went from having the film far off my radar to it being in my To-Do list. All I knew going in was that it was about three young men who find out they’re brothers. What I didn’t expect was how much more there was to the story.

It begins in the early 1980s. Nineteen-year-old Bobby Shafran has arrived for his first day at college, and despite not knowing a single person there, he’s greeted like an old friend by several students. They’re patting him on the back and telling him how happy they are to see him again. Women come up to him excitedly and shower him with hugs and friendly pecks on the cheek. Bobby’s utterly confused, but he just rolls with it. Then a classmate approaches him and provides an explanation for the dozen welcomes: Bobby looks EXACTLY like said classmate’s friend, Eddy. To prove it, he and Bobby drive over to Eddy’s house, and, to everyone’s shock and surprise, it turns out Eddy and Bobby are long-lost identical twins. News of their reunion makes it into the newspapers. Not so far away, a kid named David realizes these two brothers look EXACTLY like him. Low and behold, David is in fact the third brother, rounding out a set of triplets. Why were the boys separated at birth? Why weren’t their families told about each other’s existence. The truth behind their circumstance proves to be much more bizarre than you’d think.

Three Identical Strangers is a remarkable documentary that starts out as one thing and ends as another, and I mean that as  good thing. During the first part of the film, I had a tough time understanding why this was being shown in theaters. That’s not to say it has piss-poor quality or a weak presentation. On the contrary, director Tim Wardle does a solid job at structuring the various facets of these men’s lives in a way that builds and builds to a surprising revelation. It explores their different socio-economic backgrounds, the public’s fascination with their reunion, and how their popularity propelled them into the spotlight, and how their brief fame scored them spots on talk-shows and the 1985 Madonna movie Desperately Seeking Susan. It goes about showing through a funny, light-hearted lens. Though nothing about it feels particularly cinematic. The experience is similar to watching one of those films that go straight to the streaming service. 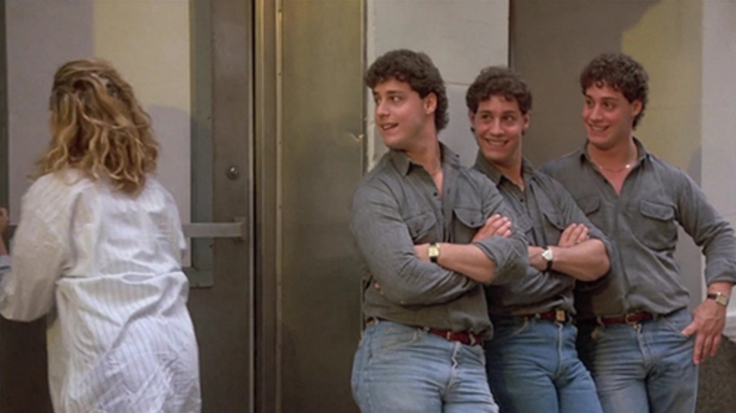 Then the revelation comes to light. Once it’s introduced, the film takes an unexpected albeit unsettling turn. What started out as a simple interesting movie turns into a sort of tame conspiracy drama. We discover the harsh deliberation of the brothers’ separation and the psychological trauma it subsequently caused these guys. I won’t say what happens exactly, but is does add a much-needed layer to the documentary that give it that cinematic edge I was missing at the start.

As interesting as it is, the film does overstay its welcome a bit. A good couple of minutes could’ve been chopped, and certain editing choices meant to intensify an emotional effect (say, using the same footage over and over again) instead comes off as gratuitous. Another example is toward the end when an epilogue card (or whatever they’re called) pops us and tells us what happened after filming stopped. But then a second later, the film picks back up and one of the interviewees repeats exactly what we just read. You can argue that’s more of a nitpick, but it does make the final five minutes feel unnecessary.

Overall, Three Identical Strangers is a fascinating documentary that offers more than you’d expect. While it isn’t one of the best films of the year, it’s subject matter deserves to be told and be seen. If it’s playing in a theater near you, I say it’s worth the chance.