“Annihilation”- Movie Review Alex Garland has had an interesting career so far. He started out as a novelist, with one of his books, “The Beach” being made into a feature […]

Alex Garland has had an interesting career so far. He started out as a novelist, with one of his books, “The Beach” being made into a feature film starring Leonardo DiCaprio and directed by Danny Boyle. He transitioned to the cinema sphere through penning screenplays for films such as 28 Days Later, Sunshine, 28 Weeks Later, Never Let Me Go, and Dredd. Then he made one hell of a directorial debut with the independent science-fiction movie, Ex Machina, which was met with critical acclaim. The guy is made talented, and his latest film, Annihilation, is not less a showcase for his willingness to go outside the box.

Natalie Portman stars as a biologist and former soldier named Lena who shocked when her long-lost husband, Kane (Oscar Isaac), returns unexpectedly. When he lands in a coma, she discovers he’d been part of a top-secret mission to investigate a large extraterrestrial force-field that’s slowly encompassing a national park. Whatever it is, it’s growing, slowly, and no one who goes in has been able to get out. Determined to find out what this thing is, Lena embarks on an expedition alongside a team of scientists (Tessa Thompson, Tuva Novotny, Gina Rodriguez, and Jennifer Jason Leigh). She and the others quickly find themselves swept up in a world of beauty and madness as they try to reach the heart of this new life-force before they lose their bodies and their minds.

If you go into this expecting a fun alien action thriller, I guarantee you’ll wind up being bored, disappointed or both. Annihilation is a cerebral experience. It’s a creepy, slow-burning sci-fi horror with an intricate story that demands your full attention. The film is presented like a piece of surrealist art. The visuals are bright, beautiful and colorful. Yet there’s something deeply disturbing about them. The mystery of what lies within the Shimmer is built up so well, and thanks to an incredibly haunting score by Geoff Barrow and Ben Salisbury, the eeriness of it all creeps into your skin. 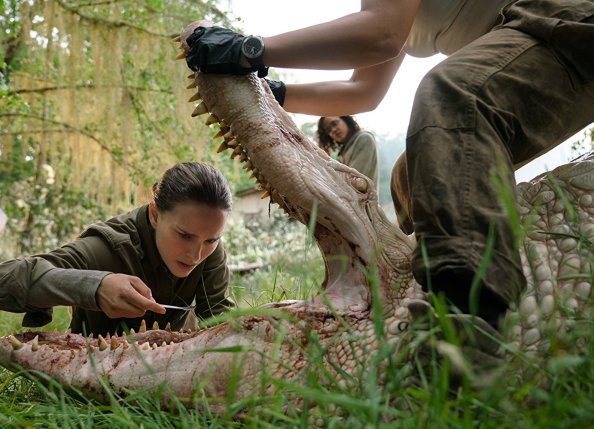 The acting from everyone is fantastic. Natalie Portman is great, and Oscar Isaac delivers a strong performance despite not being in the film as much as I figured he would be. I like the fact that the focus on the film is a highly intelligent all-female group. They function well with one another, and while they might be a tad under-written, their performances are strong enough to keep the audiences invested. I was especially impressed with Gina Rodriguez, who plays the tough-guy of the group. Maybe it’s because I’m used to seeing her be so bubbly and smiley in the promos I’ve seen for her show, Jane the Virgin. It just goes to show that she does have the dramatic chops.

The only big negative involves the way it’s structured. Without giving too much away, the whole film is basically an extended flashback. This isn’t a spoiler. This plot point is in the trailer and is introduced within the first five minutes of the film. Its Natalie Portman sitting in a room, telling a large group of government scientists what she experienced in the Shimmer. So you can guess which character makes it out okay, right? Every once in a while the film cuts back to this frame narrative, and doing so breaks the tension to summarize for the audience what they’d just seen. I have a feeling this aspect of the movie is to help explain what’s going on to the people in the audience who might be confused. But really, it wasn’t needed.

There’s not much else I want to say about Annihilation because I don’t want to run the risk of spoiling anything. It’s a creepy sci-fi film that takes a lot of chances, the majority of which worked for me. It’s the type of film I can easily see people hating, and if you don’t think it’ll be your cup of tea from reading this, you probably won’t like it too much. But if you’re in the mood for a challenge, Annihilation is a great treat.