Independence Day: Resurgence is a sequel that no one was asking for, a second chapter of a story that wrapped up nicely in 1996 and didn’t need to be continued. But alas, here we are. Roland Emmerich returns to direct this sci-fi adventure set twenty years after the global battle with the alien invaders. Humans have utilized leftover alien technology and made the world a safer place, and one that is well-prepared for any future attacks. Though an active distress signal is discovered on board a deserted spacecraft, and soon the Earth is forced to fend off the biggest and deadliest threat they’ve ever faced.

The best thing I can say about Independence Day: Resurgence has been said at the end of the trailer for the film- “Well it’s definitely bigger than the last one.” The visual effects, for the most part, are pretty impressive. There are several moments when you can literally feel the weight of the world on your shoulders. The enormity of the alien ships and the amount of destruction they cause make them seem like a viable threat. The creatures themselves look great, especially the Godzilla-scale queen of their species. There are some scenes when people are standing within a CGI’d location and it obviously looks like they’re standing in front of a green-screen. Overall, the visuals aren’t too bad.

But bigger doesn’t mean better. The film tries desperately to recapture the fun and campy quality of its predecessor, but fails to be anything more than a bloated mess of forgettable characters, a confusing plot, and weak attempts at one-liners. There isn’t one person you can latch onto emotionally, not a single character you come to care for and want to see make it out okay. The characters in the original Independence Day were, let’s be honest, stereotypes- with Will Smith being the badass military hero, Randy Quaid as the redneck comic relief, Brent Spiner as the kooky scientist- but they were stereotypes with personality. 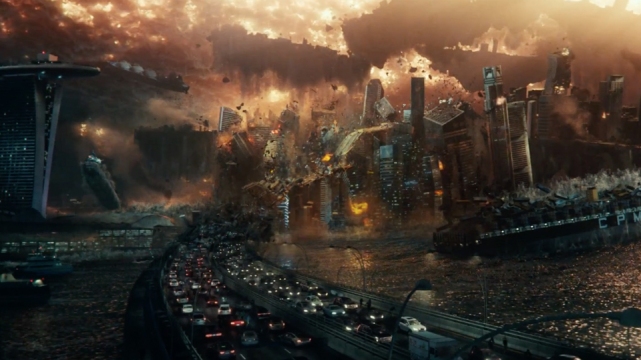 Newcomers like Liam Hemsworth (Jake), Jessie Usher (Dylan, son of Will Smith’s character), and Travis Tope (Charlie) don’t add much of anything to their roles. They are only some of a bland majority. Jeff Goldblum gives a decent performance overall, but he does so with a low energy that makes it seem like he’s going through the motions. Bill Pullman and Brent Spiner are trying but they’re so over the top to point where it’s laughable. The rest of the cast doesn’t leave much of an impression either, mostly because there’s such an over-abundance of characters that I left the theater barely able to remember their names.

Another glaring issue is the narrative. The plot is supposed to be simple: aliens come to destroy the earth. But instead the story gets stretched out so thin due to several unnecessary scenes and plot points. The film keeps cutting back to characters you don’t care about who have subplots that go nowhere. One especially pointless aspect involves Judd Hirsch, as Goldblum’s onscreen father, running into a group of kids who are trying to find refuge. My guess is that it’s meant to provide more lightheartedness to the film, but it’s only distracts from the main story. The humor never really hits, although I did chuckle once or twice, and I started getting bored as the first act was coming to a close. The final fifteen minutes has a pretty cool battle scene, though. It has the type of mindless fun that I expected to experience walking into the theater, but it comes a little too late.

Independence Day: Resurgence is a disappointment on so many levels. It’s not the worst movie I’ve seen this year, but it’s far from being anything good. Watching this film was like watching your friend take part in a track race- he’s trying his best to make it to the end, to repeat the victory he’d achieved in a previous race, but he pulls a muscle before he’s made it anywhere near the finish line. The film follows the same beats as the 1996 feature, but it’s so concerned with being visually grand that it forgets to incorporate the soul and charm that made the first movie so enjoyable.