“Midnight Special” Movie Review Superheros are all the craze nowadays. Past hits such as Sam Raimi’s Spider-Man and the 1978 classic Superman prove that the superhero genre has survived for several […]

Superheros are all the craze nowadays. Past hits such as Sam Raimi’s Spider-Man and the 1978 classic Superman prove that the superhero genre has survived for several decades. And with regular releases of Marvel, DC, and X-Men films, I think it’s safe to say that the genre has reached a golden age. So when I first saw the trailer for Midnight Special, that’s what I expected to get- a superhero story. But what I got was something completely different. While nothing spectacular, Midnight Special is an interesting drama about a father’s dedication to protect his son.

Alton (Jaeden Lieberher) is a very special boy. He knows it, his father knows it, the religious cult he was born into knows it, and, most importantly, the government knows it. Alton possesses powers so incredible that he’s viewed as a potential weapon, though others disagree. His father, Roy (Michael Shannon), takes him and flees the cult. Along with Roy’s estranged childhood friend, a state trooper named Lucas (Joel Edgerton), the three travel across the country to reach a specific place on a specific date, where they believe a celestial event will occur.

The definite strength of the film is it’s plot. It’s an interesting story, not overly complicated, and the mysteriousness of this scenario is alluring. The reason as to why the boy has supernatural abilities isn’t explained at the forefront. Is he an alien? Is he some science experiment gone wrong? Did he fall into a tub of toxic waste or get bitten by a radioactive spider? The answers aren’t initially clear. But director Jeff Nichols provides tidbits of information here and there as the movie progresses, and towards the third act the audience can put all the pieces together. In terms of the screenplay, the build up is exceptionally strong, but in terms of entertainment, it can be exceptionally dull. 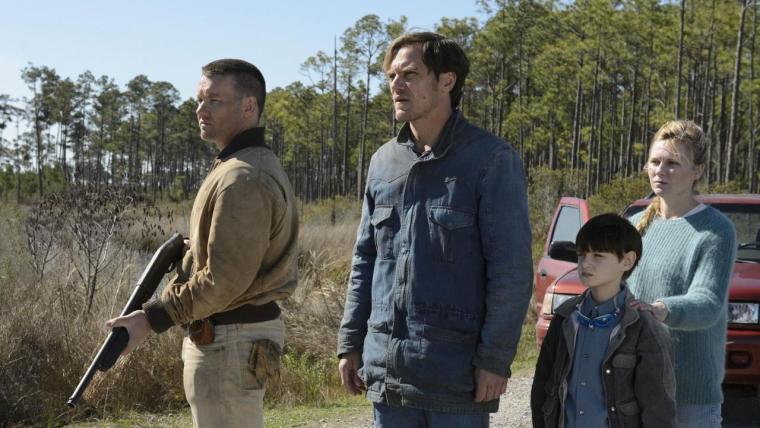 Like I said, this film is a drama focused on the relationships between family and friends. It maintains a solid level of seriousness from beginning to end, and it has more quieter moments than insane action sequences. But during the first two acts, certain moments are way too quiet, to the point where the film begins lagging and losing its steam too early. But these moments don’t last too long, and the film picks up the pace soon after.

Speaking of dullness, the relationships between the characters as well as the characters themselves aren’t particularly strong. Each actor gives a good performance, but said-performances are very monotone and reserved. And although it matches the film’s serious tone, it does feel like the raw emotional core of these relationships is muted. I wasn’t as attached to Roy and Lucas and Alton as much as I wanted to be. I was entertained by their journey, but not one hundred percent invested. There’s also a severe lack of characterization. Although I wasn’t captivated by the story by the three main leads, there was enough background information for me to care about their well-being. But supporting characters- such as Sarah (Kirsten Dunst), Alton’s mother, and Paul (Adam Driver), an FBI agent- are complete strangers. They have little to no backstory and seem more like typical movie characters instead of actual people.

So with all that said, is Midnight Special a disappointment? Yes, but I can’t go so far as to say it’s a bad film. It has its highlights, such as the cinematography and its creative story. But what keeps it from being anything great is its lack of heart. The emotional stuff is there, don’t get me wrong, but it’s severely underplayed. It’s entertaining, but the quieter moments are just too slow and boring. The film has good ideas, and I’ll argue that it could’ve explored those ideas further. Midnight Special is a decent sci-fi mystery, but is too underwhelming to be anything amazing.