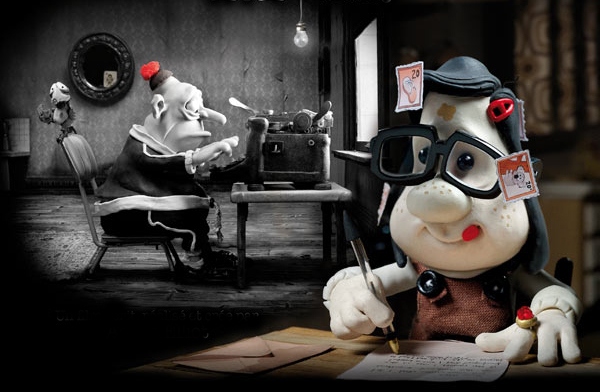 One of the first things I learned in grade school was to never judge a book by its cover. Nothing is exactly as it seems, and this reins true in the art of filmmaking. While it may look like just another cutesy animated feature, the true beauty of Mary and Max is that it manages to delve deep into adult themes but retain a charming innocence.

Writer and director Adam Elliot introduces us to a world that’s very black and white- at least, from the perspective of the main characters. The story chronicles the unlikely friendship between two troubled individuals. Mary Dinkle (Bethany Whitmore and Toni Collette) is a lonely eight year old Australian girl who lives with her alcoholic mother, disinterested father, and pet rooster. After looking through an American telephone book at the post office, Mary decides to write a letter to Max Horowitz (Philip Seymour Hoffman), an obese middle-aged man living in New York City. The two quickly become pen pals and a unique friendship begins to flourish.

What makes this film stand out is the juxtaposition between the aesthetic and the narrative. While the story focuses on the importance of friendship, it also explores some pretty dark subjects such as depression, mental illness, anxiety, obesity, loneliness, alcoholism, and even suicide. At the same time, however, the softness and the tranquil nature of claymation supports the innocent tone that film is going for.

Despite the significant age difference between Max and Mary, both of them are very naïve. Whitmore provides the voice of eight-year-old Mary while Collette voices her as an adult, and both women give a likable personality to the character. She’s insecure, but she’s curious and a hard worker. Hoffman also does an amazing job at bringing plenty of heart to a character that fails to understand the world around him. We sympathize with him as he tries to find happiness while struggling with internal and external demons.

The narrative flows smoothly from beginning to end, and both Max’s and Mary’s individual stories get an even amount of focus. Elliot’s attention to detail adds some dark humor to the film. By this I mean that there are little jokes scattered throughout that you should be sure to pay attention to. They’re clever, funny, and add a touch of humanity to the story.

Mary and Max is a hidden gem that I’m glad to have had stumbled across a few years back. It’s one of my favorite animated films and deserves so much more recognition than it’s initially receiving. It’s a dark adult film integrated within the simplistic nature of claymation style. Believe me, this isn’t a family friendly popcorn movie. But it is a film that beautifully explores the importance of friendship and, I’ll admit, had me shedding a few tears at the end.